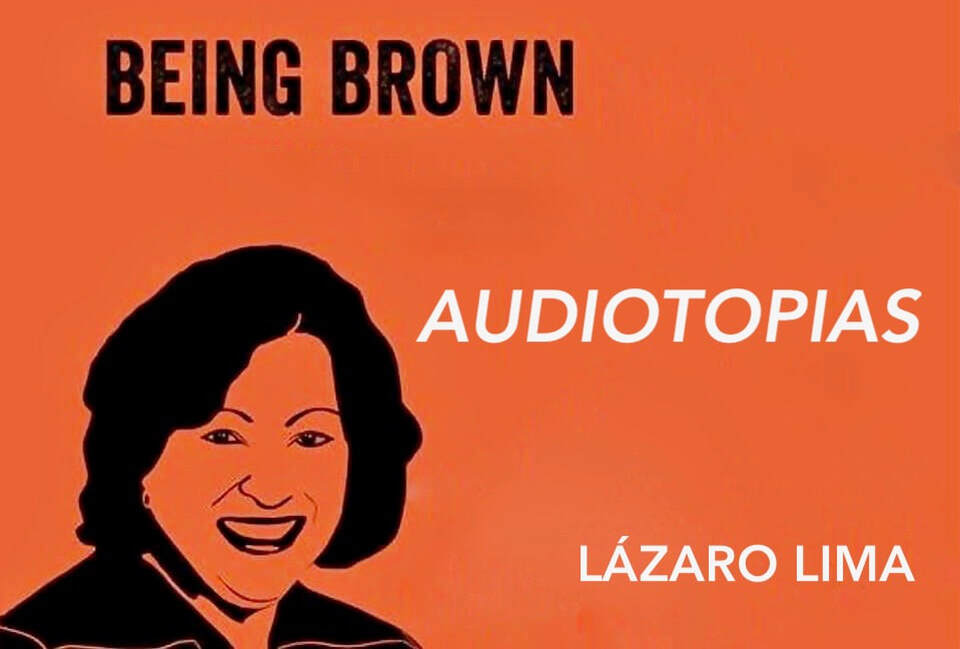 Being Brown Audiotopias
​​
"Being Brown Audiotopias" curates and discusses formative soundscapes from Sonia Sotomayor's life story. For Josh Kun, "audiotopias" refer to the experience of being transported to different worlds through the music and soundscapes associated with the significant places, people, memories, and feelings listeners attach to their emotive soundtracks (Audiotopia: Music, Race and America, 2005). The audiotopias archived in this virtual playlist are either referenced in Sotomayor's memoir My Beloved World (2013) or were on the top of the charts during the signal years I trace from her life's story in Being Brown.

The soundscapes I curate here also attempt to tell an aural history of an era under erasure by imagining how the music and the sounds that surrounded Sonia Sotomayor's formative years also tell a story about being Brown in America. This is important as the sounds as well as the stories I tell about them also represent an attempt to archive what will likely soon be erased with time as analog cedes to digital, and digital cedes to new recordation technologies, and the attendant forms of cultural remembering and historical forgetting these new technologies bring.

The soundscapes below are archived in, and belong to, the linked source pages. Much like our own memories and the mnemonic devices we use to keep them close to us like, say, photographs, the links below will invariably change, disappear, and go missing over time. Despite the inevitability of loss, searching the terms, people, and places associated with the audiotopias listed below will lead to new aural circuits for memory-making, cultural remembrance, and sonic histories yet to be written. And it is in that sense that audiotopias help to enrich the expansiveness of being alive before we too become memories.

Prelude to Being Brown in "America"

Ernesto Lecuona y Casado (1896-1963) represents an emblematic case in point to the history of ethnic remembrance and survival. Lecuana introduced Afro-Cuban and Cuban rhythms and instruments to the largely static repertoire of classical music between the two World Wars. His zarzuela, "María la O," premiered in Havana, Cuba, on March 1, 1930, at the Teatro Payret. In "María la O" Lecuona attempted to translate and convey writer Cuban Cirilio Villaverde's novel Cecilia Valdés o la Loma del Ángel (1882 [Cecilia Valdés or Ángel Hill]) as a story of racialized sexual violence through sound and timbre so that hearts could understand what eyes refused to see.

Cuban racism was so normalized into national complacency that, for Lecuona, only sonic registers could counter what historical blindness had obscured. Lecuona, whose work requires the attention of performance studies and music history scholars, was one of the first composers to understand the value of transcribing cultural and historical memory vis-à-vis sound. It is in this sense that he provides the framing musical prelude to Being Brown.

The novel itself attempted to fracture Spanish colonial racism through the story of a white privileged creole, Leandro de Gamboa, and his beloved, Cecilia Valdés, who, unbeknownst to him, is his half sister. Cecilia, who is Black but passes for white, is Leandro's daughter conceived through rape. Failed love, illegitimate governance, and ill-conceived nation building were the results of Spanish colonialism's legacy for both Villaverde and Lecuona.

The colonial subservience to whiteness, as the structuring principle for love and nation, were so stunning to Lecuona that he felt that only locally inflected historical harmonies could repair the historical discord. "Hear me," implores the zarzuela "María la O," or be doomed to failed romance and perpetual bondage. In the name of the zarzuela itself, "María la O[tra]," in English, "Maria the O[ther]," Lecuona lays bare the Caribbean as the resting place for the Atlantic slave trade's original sin: slavery. Can you hear Lecuona's historical invocations in Ana María Martínez's brilliant interpretation of "María la O"?

Introduction. On Being Brown in the Democratic Commons

​By the time Sonia Sotomayor graduated from Yale Law and joined the Manhattan District Attorney's office in 1979 NYC was experiencing an epic crime wave. The infamous Studio 54 was spinning some of the era's most iconic underground synthesizer hits of the year and "Savage Lover" by The Ring coincided with what became known as the "Tarzan" murders and robberies in NYC that Sotomayor helped to solve as prosecutor. During her years working as assistant district attorney and trial lawyer she prosecuted offenders for robbery, assault, murder, child pornography, and police brutality.

The French composer and record producer Ceronne had two hits that enveloped NYC record stores and soundscapes in 1979. If Sotomayor ventured into West Village, the ambient soundscape would no doubt have included Cerrone's "Supernature" which had already hit big in England as early as 1977, but settled stateside in late 1978. Along with Ceronne's "Love in C Minor" (1976), both were a fixture of downtown NYC life everywhere you went. While it is hard to imagine from our vantage point, in the absence of privatized soundscapes first introduced by SONY with the Walkman in 1979, someone else's musical tastes always wound up in your sensorium if they possessed the bass and the speaker strength to pump out the sound.

Like Sonia Sotomayor, the group ESG (short for Emerald, Sapphire and Gold) came of age in the South Bronx. Sisters Renne, Valerie, and Marie Scroggins created a Brown alternative to the music of the era through sheer will because they lacked the resources to buy traditional musical instruments. Instead they used borrowed synthesizers, bass and sheer talent to forge Latinx audiotopias.

Their "Moody" is a syntho-disco alternative to the overproduced disco music of the day and was a fixture at the Paradise Garage, itself an epic Black and Brown queer house-music space in NYC that was demolished in 2018. It was in "Paradise," as we called it then, that as an under-age kid with a fake ID I first heard ESG. ESG was "intersectional" before we knew what the term was.
They crossed genres as diverse as hip-hop, new-wave, disco, and punk. In the process, they united a truly diverse following that included homies, punksters, audacious divas, and closeted Brown queer boys like me from the NYC suburbs. Dancing to "Moody" felt as close to paradise as I could have imagined it then when ESG's pulsing bass beats reverberated through my body with what felt like freedom.

We should never underestimate our petit freedoms. No matter how small, these petit freedoms allow us to inhabit imaginary elsewhere that taste like liberation. And it is in that yearning that we find the will, against escape but toward freedom, to break free from our collective histories of dispossession.

During Ronald Reagan's two-term presidency (1981-1989) public education subsidies were slashed and the neoliberal order enshrined austerity for everyone but the wealthiest as corporate taxation exemptions rose in measure with deregulation. The emergence of the "one-per-center" billionaires ballooned as waged labor stagnated under a minimum wage of $3.35 that was supported by the president.

Puerto Rican John "Jellybean" Benítez's remix of "The Mexican" reinterpreted Latinx and Black resistance to stagnant labor, and rising higher educational inequities just as the 1984 reelection campaign for Reagan kicked into high gear. John Wayne, Reagan's favorite movie-star and alter-ego, had stared in the film western The Almo (1960) which distorted the history of U.S. and Texan occupation of Mexico prior to the U.S. Mexico War of 1846-48. "The Mexican" tells another version of the Alamo and the forms of resistance to American westward expansion that rarely got taught in the history books. The pedagogies of belonging offered up by Jellybean's remix of the track, originally performed by Babe Ruth in 1972, acquired meanings beyond the triumphalist version of US imperial conquest offered up by the likes of John Wayne. In so doing, it reinterpreted the David and Goliath allegory for scores of Black and Brown communities.

The remix became a house and clubhouse anthem of resistance for urban youth who were introduced to a sonic hero, Chico Fernández, who refused U.S. imperial expansion. The remix of "The Mexican" was a circuit venue hit while Benítez was a DJ at NYC's Funhouse, the Roseland Ballroom, Studio 54 and popularized on NYC dance radio station WKTU which reached into Long Island and southern Connecticut. "The Mexican" was also a staple that year at NYC clubs and in Fire Island, NY, bars where Sonia Sotomayor vacationed as told in her memoir, My Beloved World (2013, Chapter 24, pgs. 226-27).

Soundscape 6. CHECK BACK FOR UPDATED SOUNDSCAPES